Let’s just get right out and say what we all know. My Hero Academia (MHA for article’s purpose) is one of the best things to happen to anime in recent memory. The animation alone has stood atop the popular 3D modeling currently being used in many new anime, as well as the classic 2D style that this show is built upon. Musically you can’t get on YouTube without seeing a “You Say Run Goes with Everything” video. It’s a subtle but powerful soundtrack that highlights the strong character work, impactful imagery and animation, and of course, PLUS ULTRA.

Whether you’re a fan of the show or not, we should all be conscious of the fact that it’s changing shonen into something much deeper than classic titles of the same genre. But don’t get me wrong; it utilizes the same core principles and concepts.

A young boy is seemingly useless or unintelligent or lacks talent. It turns out that (GASP) his determination and unrelenting drive are his key strength, believe it!  MHA leans heavily on this framework, as do most shonen. So what’s setting this show apart from it’s predecessors?

As a frequent consumer of the show, the characters are a central starting point. The usual tropes like “the infinitely talented rival”, “the sad genius”, “the straight arrow”, and “the girl who is inspired by/in love with the protagonist” are all there, but MHA turned those overused concepts on their head. A fan favorite character “Shoto Todoroki” is the embodiment of what sets MHA apart. Let’s break it down.

Todoroki is a young boy who has the power of ice on the right side of his body and the power of fire on the other (SYMBOLISM). He refuses to use the fire powers within him because his fire powered father bred with Todoroki’s ice powered mother to produce a weapon (Shoto means sword, just FYI) that would surpass the ultimate hero, All Might. Got it? Cool. 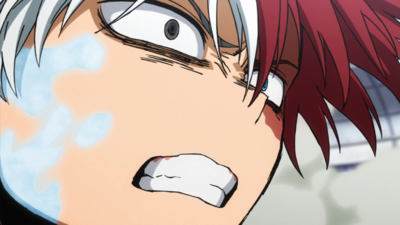 Anyway, Todoroki refuses to use these fire powers because in doing so he is rejecting the person his father is, who Todoroki’s mother hates. For… weird breeding reasons obviously. She even went as far as to splash boiling water on Todoroki’s face, giving him a constant reminder of how much pain and suffering his father sent his mother through.

Our main character Deku pushes Todoroki to use both of his powers in a battle they have during a tournament. Not because of some need to fight his opponent at full strength. Deku isn’t that kind of kid. He does it because Todoroki has some serious mental issues surrounding his abilities, and wont accept himself because Todoroki feels more like an extension of his father than like his own person. And how could Todoroki choose to limit himself when everyone is giving their all to achieve their dreams?

Todoroki pushes himself, opens the door on the concept of being his own person, and even goes to see his mother who he hasn’t seen since the face scaring incident.

So how does this all come together? What’s the point? We all know My Hero Academia is good.

Well, because Deku could undo all of this. Or more appropriately, he has the lowest chance of escaping the tropey framework that shonen are built on. Before you run down to the comments and go absolutely berserk, hear me out here.

Deku is, in his current state, a fairly solid character with a bright future ahead of him. His love of heroes and heroines has lead to a seeming unmatched understanding of quirks, the series name for super powers.  Not only their functions, but their applications and weaknesses. He plans ahead carefully and can also react to new situations rather quickly. His love and admiration for his mentor, the number one hero All Might, gives him an extremely high bar to reach as the successor to his quirk, One for All. The accumulated strength of the eight heroes and heroines before him is a huge burden to bear, and here’s where Deku’s character has a chance of falling short.

While Deku does have a multifaceted view on the experiences he’s having both at school and in the real aspect of fighting villains, his reasoning is heavily one dimensional.

There’s a strong theme in the show that might go under the radar a bit, but it makes MHA truly brilliant. The kids in the show have these strong ideals and images of what it’s like to be a hero/heroine, but they’re not based in reality. Whenever villains come around, their worldview gets shaken. Real lives are at stake. Using their powers efficiently against seasoned enemies isn’t as easy as they thought. People more experienced than them get hurt, or even die. The message is clear.

Your shonen attitude of “never give up and everything will be okay” means nothing if you don’t put in the work to be a real hero. So how does this reflect on Deku. Well let’s take a look at how he views All Might, and Deku’s responsibility as his successor.

Our protagonist is obsessed with the standard that his master sets for him. Why? Because Deku wants to be a strong person. He wants to help others. He cares about those around him, and the best way to show that compassion is through being a hero. But under the tutelage of All Might, his focus shifts. Deku pushes himself in unhealthy ways to measure up to an ideal. The image of All Might. His perception of All Might. Not the wounded and shriveled man that his mentor truly is. Because of the external pressure from his mentor and the internal pressure he puts on himself, Deku becomes self destructive.

All For One hurts Deku to use, leaving body parts broken several times over in certain instances. Even with warnings from both his teachers and his doctor, he continued to push his body to a point where he almost couldn’t come back. 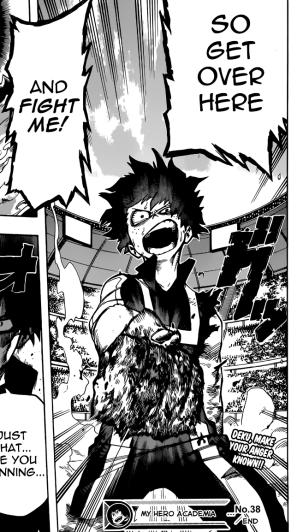 Holy moley. Slow it down, kid.

At that age, a lot of people wanted to emulate someone that inspired them. It’s natural, and it’s a good way for young people to set themselves in a good direction, but Deku has to face what all people down that path have. You can’t be someone else. The more you try, the more you’ll fail. And the more likely that you’ll end up a disillusioned man-child, like the central villain of the series. Regardless of how large the shoes you’re trying to fill are, you can only be the best you possible.

That’s where traditional shonen fail. Instead of characters having to realize that hard truth that would help them grow into a more mature and relatable character, the answer is just “because I believe”. It’s not a terrible message, because sometimes you do just have to push through without any rhyme or reason. That’s why Gurren Lagann is the shit. But we’re tired of that being the answer for every protagonist we come across.

My Hero Academia does shonen characters a service that we rarely see; providing more depth and reasoning for growth that greater reflect our real world struggles. But Deku is teetering between pushing beyond his shonen predecessors and falling into their failures.

If Deku comes to realize his own identity and value as a person, the show could change the genre for the better. If he fails, we’ll end up with dozens more “I just believe it” anime in the year to come. But I have hope for our young hero. In more recent episodes (and well into the manga), Deku is coming to face this issue more often. But the writers have to be careful with the pivotal choice ahead of their protagonist. Play it safe? Or break the mold?